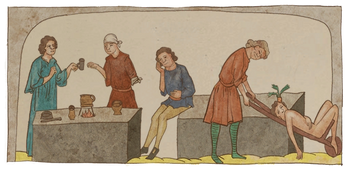 Alchemy was a discipline combining mysticism, hermeneutics, chemistry, physics and many other spheres of learning. Medieval alchemists worked in laboratories, often situated at noblemen’s mansions or in Royal cities. They found application in smelters, mints, mines, glass-works and wherever industrial production needed assistance. The work of alchemists was challenging and costly, and so required the support of patrons. Successful alchemists earned wealth and fame, while the unsuccessful ended up in prison or were sentenced to death. Two fundamental alchemical objectives persisted through the entirety of the Middle Ages: to find the mystical "philosopher’s stone" and to transmute base metals into gold.

In KCD we use a genuine preserved alchemical laboratory as our model, though the minigame itself is adapted for practical use. Instead of processing mercury and sulphur, our cauldron cooks up herbal concoctions.

Alchemy is a useful skill that transforms herbs and other ingredients into potions and remedies. In order to brew those, you need knowledge of alchemy, a recipe, an alchemist’s bench and the necessary ingredients.

In the alchemist’s lab you will find on the right side of the bench the Herbarium, which lists all the properties of herbs and all the recipes you have so far learned. You open the book with

to toggle between recipes and plant descriptions.

It's always best to follow the recipe in the book. By holding

on the recipe, you can also set all the necessary ingredients straight down on the alchemy bench.

The degree of difficulty of the brewing itself varies and each recipe requires a variable number of steps. But the first step is always to pour the potion base, which you will find on the shelf on your left, into the cauldron. The next step is to add the ingredients to the cauldron and brew the mixture on the prescribed flame, which is regulated by means of the bellows

If the recipe demands it, you must take care to grind the ingredients using the mortar and pestle. The brewed potion can then be poured directly from the cauldron into the phial, or passed through the distiller.

The recipe steps must be adhered to precisely — if you deviate too much from them, the potion will fail, you'll lost all your ingredients and the whole brewing process will have to be repeated.

Once you've become skilled enough at alchemy, you'll have the option of auto-brewing potions by holding

Note: From a cold start, one pull of the bellow is considered "cook", 2 consecutive pulls is "simmer", three consecutive pull of the bellow is "boil". This wiki previously INCORRECTLY stated that "each pull is 1 turn". This is wrong, use the hourglass to keep the time and pay close attention to the animation to keep potion at correct heat level. If you can not get 3 potions from level 0 alchemy, you made a mistake.

Note: There is no recipe book for the following potions:

Note: There is a degree of "failure" that is tolerated without spoiling the potion.