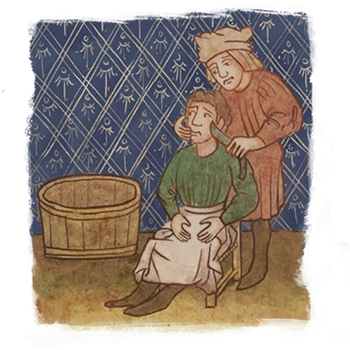 Where hygiene and bathing was not up to scratch, the public baths were on the rise. Public baths in Central Europe appeared from about the 12th century. There were baths quite literally in every town, and not in small numbers. Sometimes a town would have three to four bathhouses. Here, people had access to hot water for bathing or steam baths. In those times, steam was produced by pouring water onto heated bars of iron or stones. Bodily cleanliness was in the care of male and female bath assistants. Fully body washing was done in bath tubs, coopered wooden vats and tanks.

In Bohemia, there were baths in operation since the early Middle Ages and their numbers rose steadily. There were 47 public baths in Prague in the second half of the 14th century and by the 15th century the baths were attended not just by the well-to-do, but also by the poorer classes. There was even a regulation that the bath-keepers had to open their doors once a quarter to the poor and to students. Bathhouses typically belonged to the municipality, and were leased to the bath-keepers. In addition to municipal and private baths, there were also private baths in the houses of the nobility and wealthy townspeople.

In the 13th and 14th century, the bath-houses were very much associated with prostitution. In the 13th century particularly, bath-house prostitution became widespread and there were scarcely any that did not provide sexual services. In the richer urban baths there would also be pharmacists, massage therapists, stokers and cleaners. In the villages the bath-house keeper had to do all these jobs himself.