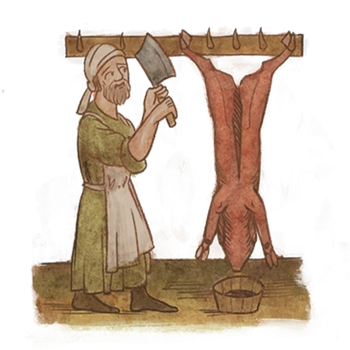 The butcher’s profession appears only in the 13th century, because prior to this each townsman or villager could keep his own livestock and butcher the animals in his own yard. In later centuries this led to conflicts with professional butchers, leading to the trade of meat being brought under statute with regard to guild rights.

The main tasks of a butcher were to slaughter animals, carve up and portion them and preserve the meat outside of the town limits. Raw meat could not be transported inside the town and domestic sale was severely punished. These measures were intended to prevent the spread of disease from old or badly processed meat.

In time, the butchers’ guild split into different specializations, such as those who worked only with lard and suet (tallow butchers), small cut specialists, cured meats specialists and those dealing in horns, hooves and mucilage. The butcher’s craft also spawned tanners, saddlers and cobblers.