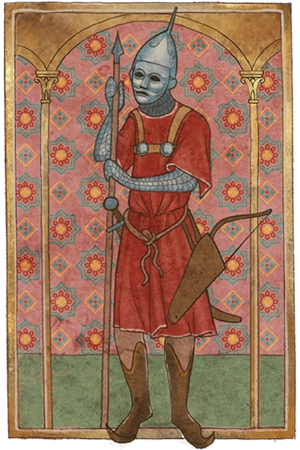 Cumans are a horse people from eastern Europe, north of the Black Sea. They were expelled by the Mongols in the 13th century and some of them found a new home in Hungary in 1239. King Béla IV of Hungary gave them their own land in Hungary and special rights. As a reward, they had to fight as guards for him. In 1403, the Descendants of this Cuman were still in this position, and so they were under the control of King Sigismund of Hungary.

The Cumans are the main antagonists of Kingdom Come: Deliverance under the leadership of Sigismund of Hungary.

The Cumans first arrived in Czech lands in 1260. Under the leadership of the Hungarian Crown Prince Stephen they fought against Bishop Bruno and the army of the Austrian lords, which they thoroughly vanquished.

The Cumans appeared for the second time in the 1270s, when they defeated the army of King Přemysl Otakar and went on to pillage Moravia.

They last invaded the Czech lands under Sigismund of Luxembourg, who could afford no better mercenaries than the Cumans. Estimates speak of several thousand fighters. One of the places that succumbed to their ravages was Silver Skalitz, the birthplace of our game’s hero.