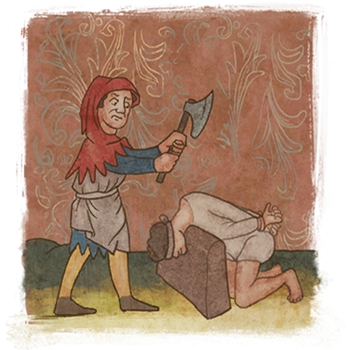 The profession of executioner dates back to ancient Egypt and Rome, reappearing in Europe in the 13th century. Before this, capital punishment was meted by the judges themselves, or the prosecutors or relatives of the condemned, or other persons as suited. It was only with the advent of the executioner that all tasks were under his remit. Although the executioner by his profession came in to considerable money and it was a status symbol for a town to have its own, the hangman or headsman would be a social outcast. For an honest citizen to make any contact with the executioner was to lose respect, and the executioner himself had to endure a lot of discriminatory measures – sitting at a separate place in the church and at the inn, not taking part in social functions and celebrations, etc.

The executioner took charge of punishments such as hanging, breaking knees, quartering, burning and torturing, drawing by horses, or beheading. He had his assistants—his henchmen – who helped him with preparation and took away the bodies of the executed. Other tasks done by the executioner included the role of the knacker, who cleared away animal cadavers, caught stray dogs and even sometimes just cleaned up filth from the streets. The executioner might also oversee the town brothel, was somewhat familiar with surgery, could set broken bones, dislocated limbs, or to amputate them in cases of gangrene. Sometimes the executioner sold articles directly related to the an execution to the superstitious, for example, the hanging ropes or the hanged man’s fingers or amulets made from his hair.