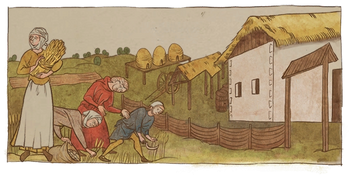 Unlike today, when the land has long been given over to agriculture, the burgeoning of farming in the Middle Ages brought the need for new fields where there were only forests or untilled land. The timber from forest clearing was used for construction, the remaining roots, stumps and scrub were burned, and the ground then levelled. The finished fields were cultivated by the 'three-field system' – a third of the land lay fallow for two years to recover nutrients - this was used for grazing livestock, which added manure. It was then returned to use and tilled, while in turn another third, which had been used for raising crops, was left to lie fallow. There was thus a regular crop rotation to save exhausting the soil.

In the earliest times, ploughing was done with a simple device called an ard- or scratch-plough. Where the soil was stony, working it was very hard. The tiller had to keep watching the plough and used great force to push it into the ground. Similarly clumsy and imperfect were the 'harrows' of the time. After harrowing, any remaining clods of earth would be crumbled with a mattock or wooden mallet. This work was typically done by women and children.

The most common crop, wheat, used to be full of weeds, and as such not very economical, 15 largish sheaves yielding only about 18 kg of grain, often even less. Harvesting often had to be done using only a sickle for cutting. After drying, the grain was threshed out.

Vegetables and legumes were cultivated to a greater extent than today, grown in fenced gardens next to houses. These were mostly peas and lentils, but also vetch and beans, and around the villages, flax and hemp were grown extensively. Hops were grown in signorial fields for the liege lord's brewery.