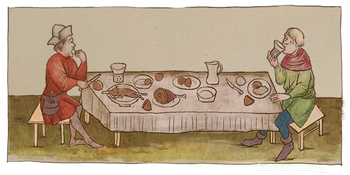 In the Middle Ages, whether at a village or the Royal Court, the foodstuffs used were mainly those sourced locally – vegetables: primarily cabbage, onions, parsnips, turnips, beets and garlic, and to a lesser extent carrots, celeriac, parsley, cucumbers and melons; legumes: peas, lentils, vetches and beans; fruit: apples, pears, cherries and plums, and berries, nuts, seeds and cereals. Eggs, milk and cheese were available all year round. Depending on wealth, availability and the seasons, there was meat (venison, poultry, fish) and from abroad spices, fruits and condiments, including saffron, dates, figs, nutmeg, pepper, sugar, ginger and cardamom. Food was flavoured with oil, vinegar, salt, honey and herbs.

The most popular kinds of food in the 14th and 15th centuries were thick broth soups, purées and sauces for dunking bread in. The bread was rye, with white bread only available at Court.

During feasts there were fish dishes - using herring, for example - roast meats, sausages, minced meat and black pudding. Desserts were made with almonds, marzipan, sweet purées with fruit boiled in milk or with added cream, jams and preserves, baked, fresh or dried fruits and assorted cakes.

In rural areas gruel and porridge of various kinds accounted for the bulk of the diet. Meat was expensive and hunting in the forests prohibited (all game belonged to the aristocracy), which was mostly compensated for by eating fish.

Many ingredients that are common today were unavailable in the Middle Ages, such as potatoes, tomatoes, sweetcorn, peppers and rice, which later made their way to Europe after the discovery of America or as imports from Asia.