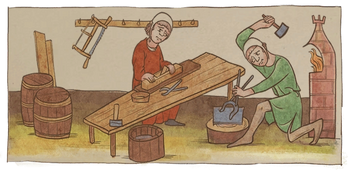 Medieval town society was made up largely of craftsmen and merchants, who ensured its socio-economic growth. Based on their freeman rights they would exercise their craft and had the right to market. In addition to privileges such as the protection of and support for the town's operation, health care and food provision, it was their duty to pay taxes on every sale or transport of goods outside the town limits. In essence the status of the municipality was dependent on them, hence it was important that they did not relocate and ply their trade elsewhere, passing their occupation on to following generations.

In the space of one century, several craftsmen of the same profession would become active in a town. These artisans gradually began to form themselves into groups with political and economic rules, or members' guilds. They had their seals of office and pennants bearing the guild crests granted by the monarch. Each member of a guild had they support of the others, and they all agreed on prices and the regulation of sales, and the rules for apprenticeship and discharging of their duties. No one without guild membership could trade in goods.