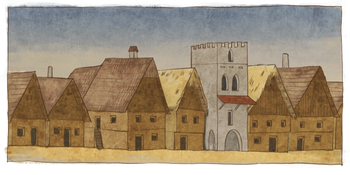 The core of the medieval house, whether in a village or town, consisted of a kitchen, a hall and living room (hearth room). All were on the ground floor. From the 15th century onwards, upper storeys started to be added. The walls were insulated from the outside with clay daub, which also gave the house some fire protection. Windows were kept very small to save heat.

The grounds of the house were usually fenced in and the courtyard had gates broad enough to admit a covered wagon. Attached to houses were utility buildings: barns, stables, outhouses, forges and wood sheds or food granaries. Waste was taken outside the house, into the fields, or disposed of in cesspits. Outside the house would be toilets built over sewage pits.

A typical village house was single-storey, with the front door leading in from the courtyard into a central space, off which was a living room and a chamber. The houses were built of wood on stone foundations. The 'jizba', or main room of village households, constituted the living space and kitchen, with an oven and a hearth. Above the hearth was a smoke hole to the roof space. Other areas served as stores for cereals, tools, food in jars or chest, etc.

Lighting was provided by torches, candles in pottery candlesticks and most of all by firelight from the hearth. The floor was compacted clay mixed with straw, leaves or animal hair. The roof was typically thatched (sheafs of rye or reed straw, often doubled). In front of the house was a garden and a courtyard with farm buildings for poultry, pigs and cattle.