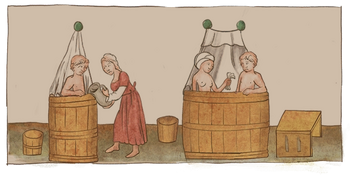 Sufficient supplies of drinking water constituted a crucial matter for the medieval town. The townspeople often solved the issue by excavating wells in the grounds of their houses or even in the cellar. Apart from these, there were also public wells. The same usually applied in castles, where a well was often dug out to collect water from a nearby source, such as a stream. Well-building was very costly and not possible everywhere. Castle wells could reach enormous depths, in extreme cases even more than 100m deep. It proved more effectual to build a cistern - a tank that resembled a well, but did not have its own water source. They usually collected rain water, which was filtered, and would be emptied out once a year.

As well as the obtaining fresh water, drainage was necessary. The building of simple sewers or drains is attested to by instructions from aldermen regulating that these sewers be dug and maintained, follow the shortest route and covered from above. Especially in towns, open ditches along paved roads served as drains. Such a system of sewage disposal was a nuisance to the populace, a source of unpleasant smells and spread infectious diseases and epidemics. Hence the originally open ditches were progressively covered over, eventually replaced by brick sewers, which diverted rainwater from the streets and roofs to the nearest watercourse or pond. The regularly recurring epidemics spreading around Europe later demanded a more radical solution.

From the 13th century on, waste was dumped behind the house or buried in pits. Toilets consisted of cesspits topped with a wooden superstructure with a seat or just a board. There were water drainage systems and no lack of free-standing latrines or outhouses, or at castles 'privies'.

It was not uncommon for a latrine to be shared between several dwellings. In the inhospitable and badly-heated castles, there were sometimes bathrooms with bathtubs or even plunge pools. Swimming was attractive not just as a means of cleansing the body, but also for pleasure. In private houses a bathroom was a sign of luxury and high status. This did not mean that wealthier residents washed more often, just that they were more readily able to put on clean clothes.

The most common acts of hygiene included hand washing. Even the poorest homes affording a basin with a water pitcher or a suspended water cistern with a faucet. The cleanest people were villagers, who would often wash in the stables or the river.

The Church was generally against cleansing the body, and so allowed the priests or monks to bathe only twice a year—at Christmas and on the feast day of some chosen patron. In spite of this there were public baths in each town where people went not just to get clean, but to socialize. Contrary to today’s notions, the people of that time were not very prudish and men and women shared the bathhouse together. Even the urban poor had the right to visit the baths, paid for by the municipality.