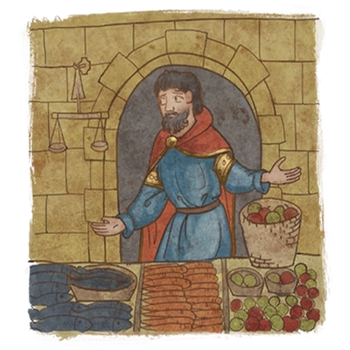 Merchants were of two types – settled (permanent) and travelling (occasional). The settled traders had permanent shops in towns and villages, while travelling merchants only brought their wares to the markets. Markets (held once a week) and fairs (held twice a year) also offered wares by local shopkeepers, visitors and pedlars or hawkers – street vendors without a fixed site. Shopkeepers had their permanent shops on the square, merchants ran small shops and had the right to retail products they bought from artisans.

Village folk got their supplies from neighbouring craftspeople, in the local tavern or from a merchant who brought supplies from larger townships. At the markets, goods from the village would be exchanged for goods produced and available in the town. The terms of trade were set by the ruler, for example that only local merchants in sworn possession of freedom of the city rights could sell their goods freely. Only the traders from large cities would venture abroad.

Many regulations and detailed rules governed trade. If it were found that a merchant was dishonest and, for example, gave short weight, he was severely punished.