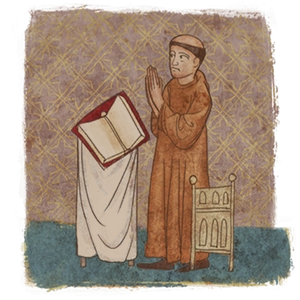 Every monastery, especially those of the Benedictine Order, followed specific rules regarding allocation of time, activities and positions in the monastery hierarchy. In addition to worship, devotional reading and copying or illuminating books, the monks laboured physically. Depending on the time of year, they devoted between six and eight hours to labour, three and a half hours to prayer and an equal time to study. The remainder of the day was allocated for rest and short sleep.

Monasteries often had seminaries for monks and future priests, as well as medicinal workshops. The Brother Infirmarius, the monk in charge of healing, worked not only in the monastery infirmary, but also helped outside the monastery, attending sick or wounded in neighbouring villages and towns.

The day was divided by prayers – the Liturgy of the Hours – consisting of seven offices, beginning with Matins (also called Vigils) after midnight, the first choral prayers, Lauds, were recited at dawn or between 3 am and 4 am, followed by Prime (at the time of the Equinox at 6 am), Terce (at 9 am), Sext at noon and None at around 3 o'clock in the afternoon; an hour before sunset the evening prayers, Vespers, were said and the daily cycle closed before bedtime, usually half an hour after sunset, with Compline.

After morning mass, the community met in the Chapter House and listened to readings selected from chapters of the Rule, the order’s book of precepts and regulations. Then there was a sermon and debate concerning the monastery. The brothers confessed their sins and were rebuked or rebuked others. Until midday prayers (Sext), they worked or studied.