Sometimes you need powers of persuasion to achieve your goals. When talking to people, you can often choose what kind of impression you want to make on them.

It's not only the manner of persuasion that's important, but also the specific offer, because sometimes it's not enough just to choose according to your highest characteristics. You have to really read what Henry is going to say!

But different approaches work on different people. You won’t intimidate a tough brawler easily and no matter how well you dress, you won't impress the nobility easily. That's because Henry’s abilities aren’t simply assigned a universal value, but compared with the abilities of his counterpart. You can see the values of the various abilities in the game under the corresponding icons. You can always see your own abilities. Your counterparts’ abilities are visible to you if it's someone you know well or if you're skilled at reading people (learned the perk Empathetic). 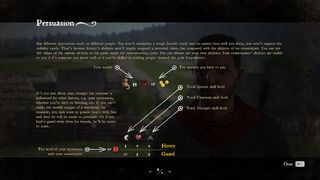 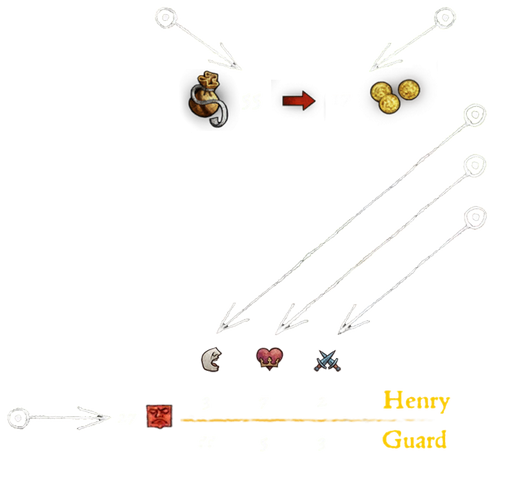 Your money
The amount you have to pay
Total Speech skill level
Total Charisma skill level
Total Strength skill level
It's not just about stats though: the outcome is influenced by other factors, e.g. your reputation, whether you're dirty or bleeding etc. If you can't outdo the nimble tongue of a merchant, for example, you may want to poison him a little first and then he will be easier to persuade. Or if you lead a guard away from his friends, he'll be easier to scare.
The level of your reputation with your counterpart.
Retrieved from "https://kingdomcomedeliverance-archive.fandom.com/wiki/Persuasion?oldid=20397"
Category: