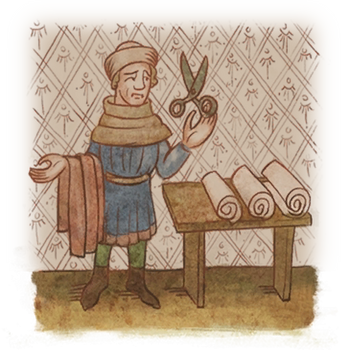 Until the 13th century, the tanners sold their wares for processing to suturers and cobblers. Cloth was made by weavers, but traded by drapers, who also often cut and sold it by the cubit - the length of the forearm. Only later, during the high Middle Ages, did tailors sew cut pieces into garments. Simple garments were sewn by women themselves for their families. It was an issue to make sure the garments were well-sewn, since they were inherited and would often last for decades, with minor repairs.

By the beginning of the 14th century, people in larger cities were paying ever more heed to fashion. A tailor would begin to specialize in only one kind of garment, hence we find coatmakers, hosiers, hoodmakers, gantiers, hatters and capemakers, and those who did alterations and repairs to old clothes. In a town the size of Rattay, the tailor had to turn his hand to general-purpose work.