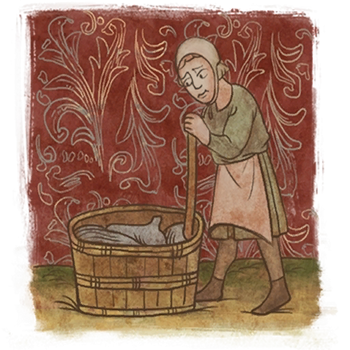 The tanner was a craftsman who prepared and treated animal skins, after which he passed them on to cobblers, saddlers or other craftsmen for making footwear, garments, bags, wineskins, etc.

It was not a pleasant job, because the skin had to be quickly scraped of its fat and conserved to stop it going off, which was done by immersing in urine. In view of the unsavoury smells produced by their trade, tanners settled in the outskirts of towns and belonged to the same reviled group as executioners, knackers and prostitutes.

To turn hide into a material for making shoes or clothing, after the removal from the animal it must be thoroughly soaked in water. Once softened, it is fleshed - the residual gore and membranes are scraped off, with a long dull paring knife. In order to rid the hide of fur, it had to be soaked in limewater or rubbed with slaked lime, then scudded. It was then tanned by using alum (by a Currier), with fishoi (by the Chamoisier) or with tannins (dealt with by the Tanner) from oak, beech or other tree bark. During this whole lengthy process the hide softened, was stopped from decomposing and optionally turned a different colour. At the end of the process, the hides were submerged for a few weeks in vats or pits full of urine. The leather thus produced was then dried and could be surface treated, painted or polished.