The Golden Age of Charles IV 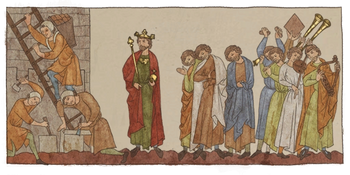 When the young son of John of Luxembourg, Charles inherited the title of Moravian Margrave and subsequently the Czech throne, he embarked on not only economic, but also cultural development of his kingdom, a period dubbed the 'Golden Era'.

In 1348, Charles founded one of the oldest universities in Europe. Many cities, towns and castles acquired new fortifications and new bridges, infrastructure, and churches were built.

To strengthen his position in Europe, he made good use of political marriages, thus allying his family with prominent families in neighbouring countries. He even had influence over the appointment of ecclesiastical dignitaries. Thanks to firm rule and a policy based on alliances, he was able to keep the peace in Europe.

Charles was an educated monarch, interested in the arts, which was reflected in the architecture of cities, especially in Prague, where under his rule, many new houses, churches (including St Vitus' Cathedral) and the city walls sprang up.